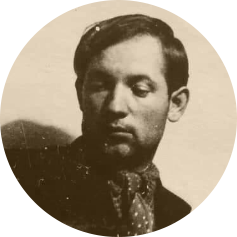 Born on October 3 ‘1911
in the station of Paniutyne

Petro Sliota. Born on 3 October 1911 in the station of Paniutyne in a family of a railway train driver.

In 1932 enrolled at Kharkiv Art Institute. In 1934 exchanged to Kyiv Art Institute to continue studies at the workshop of the outstanding Ukrainian painter Fedir Krychevskyi.

Participated in the Finnish and the Second World wars. During the war period, conducted military service in the ranks of the Soviet army at the Karelian frontline. Awarded with a medal «For the victory over Germany». Worked as a painter in a frontline newspaper. Participated in nearly every republican exhibition, held classes in Kyiv Art Institute.

In 1946 married Halyna Zoria, a paintress. In 1947, their first daughter Olga was born; and in 1950, their second one, Oksana, entered this world. Both later became outstanding Ukrainian painters.

In 1956 Petro went on a trip to France, in which a series of Paris sketches emerged. Later on, one saw such paintings as «Paris on 12th of June», «Paris. Notre-Dame», «Notre-Dame de Paris» (1960) and other. In June 1956, together with his wife, Petro goes for a cruise around Europe. The route included visiting Bulgaria, Italy, France, Netherlands, and Sweden. During the cruise, a great number of sketches were brought to life. In 1962 – a trip to Czechoslovakia, which led to creation of paintings «A street in Kosice», «Charles bridge» and other. In 1962 – a trip to Romania and Bulgaria. A number of Romanian and Bulgarian sketches is drawn. In the series of landscape paintings dedicated to Bulgaria, Sweden, France, Italy, Turkey and Czechoslovakia, Petro shows a great skill of unfolding the most distinctive features, both national and social.

In 1973 – awarded a title of a Distinguished Artist of the USSR Awarded a medal «For the Valorous Labor».

The artworks are kept
Petro Sliota’s masterpieces have carved out a rightful place in the history of the Ukrainian fine arts. Best of them are retained in numerous museums of Ukraine and Russia, as well as in private collections in Ukraine and Europe.
Main artworks

Petro was famous not only as one of the best landscapists in Ukraine, but also as the author of numerous theme-based paintings: «A rally in liberated Kyiv» (1947) and others. The painter’s creative portfolio includes many paintings dedicated to historic sites related to the heroic past of the Ukrainian people: «Three wells from Bohdan Khmelnytskyi’s age» (1953), «Tarasova hill in Kanev» (1949) and others. However, it is the landscape painting in which his talent is entirely unfolded. The painter perceives life in his own way: sincerely and with love. And even in the everyday motifs («In the springtime» 1959, «In winter» 1955, «The outskirts» 1970, «The start of the autumn» 1970), his colors gleam optimism, distinguishing themselves with clarity, simplicity and a keen understanding of the environment.