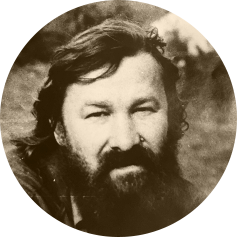 Mykola Popinov did military service in Kyiv, upon completion of which enrolled at Kyiv Institute of Fine Arts, which he graduated in 1974. Worked in affiche and monumentally-decorative painting genres.

In 1979 was granted title of honor «Honored Artist in USSR». In 1982 was granted National Komsomol Award n.a. Mykola Ostrovskyi.

Mykola’s posters are notable for their deep symbolism and accuracy choosing of characters. Poster «Lenin – founder of Communist Party in the Soviet Union» (1977) was the first printed work of the artist. The poster brought Mykola the first prize for the best political poster at the national competition of young artists in 1977. Poster «Peace is our ideal», the one exhibited at International exhibition of advertising graphics in 1978, and poster in Brno (VII Biennale of applied graphic art), where he was rewarded with silver medal, brought Mykola Popinov wide recognition. In 1977 Mykola Popinov, inspired by the poem of a famous Ukrainian poet, Sosiura «To Motherland shall give we all our efforts and attempts, all love and warmth of our hearts», created one more famous poster. He won the first prize at the national competition dedicated to the 60th anniversary of October.

Mykola Popinov frequently resorts to photo- and serigraphics. He managed to process photography graphically and thematically in such a manner that it acquired artistic figurativeness without affecting its accuracy. Photographics helps to achieve good visual perception of the poster from afar, and make all the tiny details look more and more distinctive while approaching it.

Poster «1500. Hero-city. Beaver-city» brought Mykola Popinov the first prize at the national contest of posters in 1982.

Venturing himself in monumental and decorative art, he did out The Kyiv Film Actor Theatre, inter alia its exterior, emblem, etc. He was one of the most active and outstanding artists in Ukrainian political poster genre.

Mykola Popinov passed away on September 14 ‘2005 in Kyiv.