BACK TO THE FAMILY 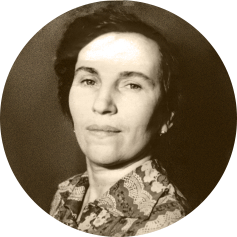 Halyna’s farther was Denys Zorya, ebonist, morther was Kateryna Podnebesna, apiarist. Love of arts was cultivated by a German lady, who gave lessons of painting to Halyna. In 1932–1946 studied at Kyiv Arts Institute under the tutelage of M. Boychuk, P. Volokydin, O. Shovkunenko. In 1937 married Mykola Shevchenko, an architect, the same year they gave birth to their son Mykola Shevchenko, who became a famous artist later on. March 13 ‘1943 Mykola’s farther died at the Great Patriotic War front.

Since 1946 – member of Ukraine’s National Union of Artists. In 1946 Halyna Zorya married Petro Sliota, an artist. In 1947 they gave birth to their first daughter, Olga and in 1950 to their second daughter Oksana. Both of them became outstanding Ukrainian artists. Petro Sliota loved and raised Mykola Shevchenko as his own child.

Since 1947 Halyna Zorya became a permanent participant of national art exhibitions. In 1955 her works were exhibited in Poland.

In 1956 Halyna together with her husband went on a cruise-trip round Europe (Bulgaria, Greece, Italy, France, Netherlands and Sweden). This trip had a great impact on her artistry and marked a turning point in her work. She created series of sketches during the cruise-trip. September 21 ‘1988 she was awarded «Veteran of Labour» medal. Halyna and her family lived and worked in Kyiv, rested and dedicatedly worked in Hurzuf (Korovin house), Host and Ochakiv (art-base of Ukraine’s National Union of Artists). Special place in her life was occupied by Oster, where was the family’s summer house. History, landscapes, local people, their life and daily routine permanently reflected in the paintings of Halyna Zorya and Petro Sliota as peony and apple trees in bloom, shirleys, fruit and vegetables baskets still-life, family, friends and neighbors portrait series. Flora always inspired Halyna: flowers, lilacs, alceas, dahlias, chestnuts, snowballs, jasmines and lilies, elderflowers; poppies in different variations. She loved to paint flowerbeds or bunches of roses, opulent fruit still-lives against marine or city scape.

The artworks are kept